What a sight! Watching the whole PSLV-C37 mission from the point of view of its multiple on-board cameras felt so totally out of this world [pun intended]. Replaying the video excitedly, over & over again, with undiminished intensity, would qualify as a Space enthusiast's Basic Instinct moment - you, a 90s adolescent, will get it ;). To witness the launch, as if strapped to the Rocket itself, besides the unadulterated thrill, also triggered a thought that did not, well, get triggered earlier.

Multiple engines, operating in succession, a.k.a Stages, propel the Rocket towards the point, where it could initiate satellite deployment. One amongst the gazillion ways in which a launch mission could fail, therefore, Stage Separation would constitute a critical vulnerability. Watching the on-board view of the Polar Satellite Launch Vehicle [PSLV] jettisoning the remnant of a Stage - Fuel Tank, Engine & Control System, helped underline the importance of this step. Staging & jettison achieve 2 broad objectives - One, Staging allows for the rocket to be propelled by an Engine optimised for that phase of the flight trajectory; Two, by unloading the dead-weight, it reduces the net mass needed to be accelerated upward.

Precedence tells us that missions have failed because Space Transportation Systems [STS] have experienced improper Stage separation. In 2015, Russia’s Progress 59 Unmanned Cargo Spacecraft mission ended in failure as it "experienced difficulties during separation from the third stage of its Soyuz booster rocket". Failure of its Stage 3 to function correctly is again attributed as the cause of the failure of its Progress 65 [aka MS-04] mission, last December, in 2016.  The Japan Aerospace Exploration Agency's [JAXA] H-IIA F6 mission of November 29, 2003 ended in failure after one of its Solid Rocket Booster [SRB] failed to jettison. The PSLV's first ever launch, the PSLV-D1, launched in September 20, 1993 was, itself, unsuccessful due to separation & jettison issues.

The annotated photograph of the PSLV, below, lists out the various mechanisms ISRO has employed in order to achieve Actuation, Release & Separation impulse in its various stages. 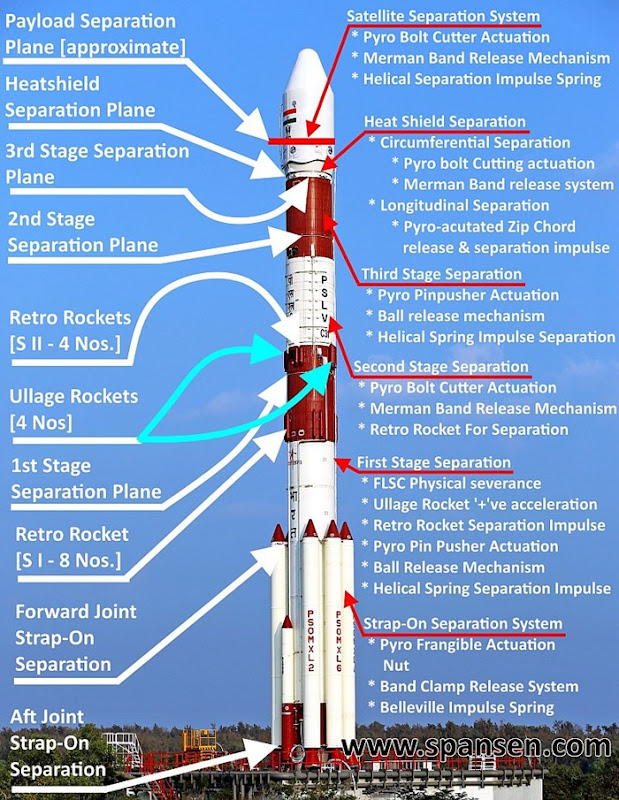 As seen in the picture, above, a 4-stage PSLV launch mission experiences 6 groups of Separation instances - the 6 Propellant Strap-On Motors [PSOM], Stage I, Stage II, Stage III, Heatshield separation &, finally, Satellite deployment. A proper Separation system requires that the mechanism induce as little unbalanced forces to the Vehicle, as possible. Neither should the process create debris, that can potentially strike the parent body, nor should the separating bodies re-connect. Most importantly, the separation process must be accurately timed to occur as per sequence.

The following illustration shows some of the commonly adopted ways in which the above operations are performed. Save for the Cold compressed gas actuation, the PSLV utilises all other mechanisms, in one or the other combination, to achieve separation.

While an explanation of every system highlighted is beyond the scope of this post - Bing it, a few solutions employed merit some elaboration. To deploy Satellites, ISRO chooses from a variety of interfaces that allow for it to be mounted on top of the 4th Stage of the PSLV's Vehicle Equipment Bay [VEB]. The main payload is strapped using a 937 mm diameter system of Merman Clamp Band, pyro Bolt Cutters & up to 12 Helical Springs, compressed to a load of around 1kN, imparting an impulse velocity of 0.8-1.2 m/s to the satellite. 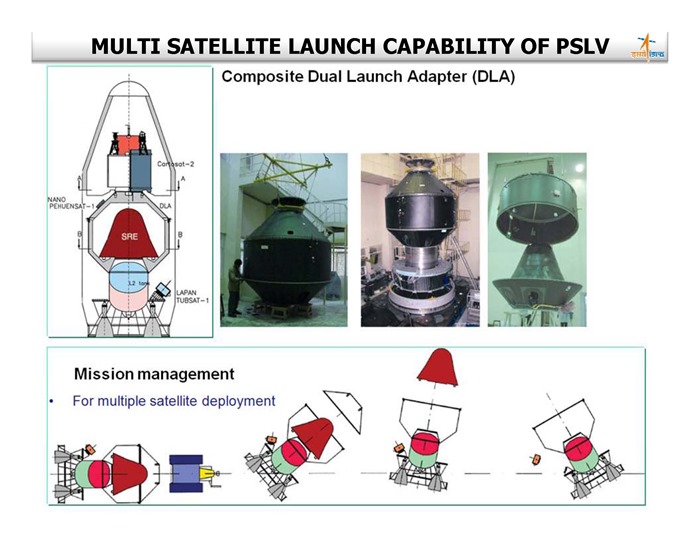 Operating condition of the Rocket, in a particular stage of flight, plays an important role in determining the choice of mechanism used. For example, the PSLV Stage I utilises Flexible Linear Shaped Charge [FLSC] to effect a release at the end of operation. The FLSC, upon actuation, creates a high-speed jet, shearing circumferentially through the metal, causing the separation. FLSC, however, is used only in the sturdier Stage I due to the relatively high unbalanced shock waves generated during the process, that can induce instabilities in the lighter upper stages. 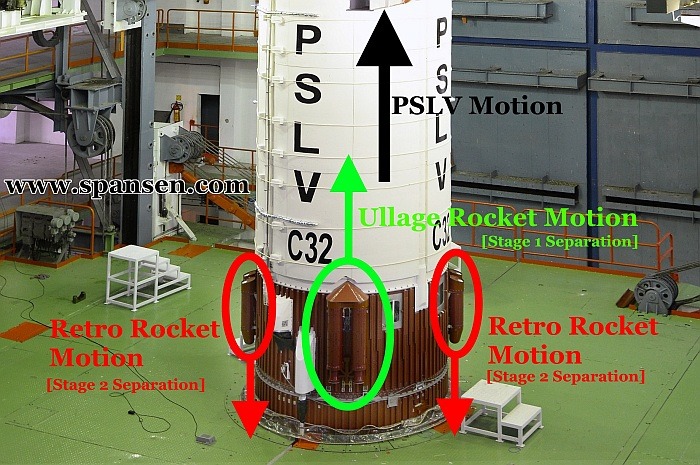 Ullage & Retro Rockets, attached to the outer surface of the PSLV, are another interesting mechanism utilised in the Jettison process. The PSLV uses 12 Retro Rockets - 8 for Stage I & 4 for Stage II; while 4 Ullage Rockets mounted on the body of Stage II activate during Stage I separation. This photograph of the PSLV-C32, above, shows a clear view of the Ullage & Retro rockets mounted on the body. Retro Rockets, attached to the jettisoning body, imparts the jettison a velocity, away from the PSLV, decelerating it, increasing the distance between the two. 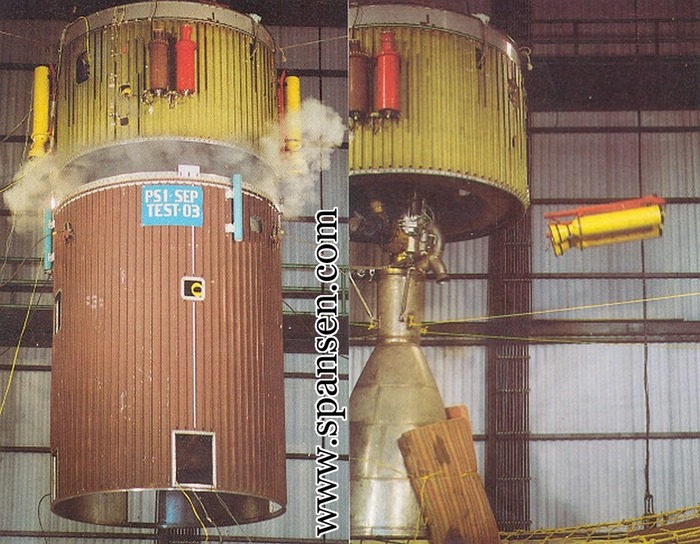 The Ullage Rocket, OTOH, mounted on A-frames, is attached to the parent body of the Launch Vehicle, using a ball-lock mechanism. It provides a momentary supplementary push to the PSLV in direction of its motion, further increasing the distance between the jettisoned Stage I & the remaining Rocket. Once the Ullage Rockets ceases operation, they too undergo jettison, actuated by pyro-pin pushers, to release the ball-lock with Spring-loaded thrusters pushing it away.

Have tabulated the various Actuation, Release & Separation impulse mechanisms used in each instance of the PSLV's separation. Hope it comes in handy.